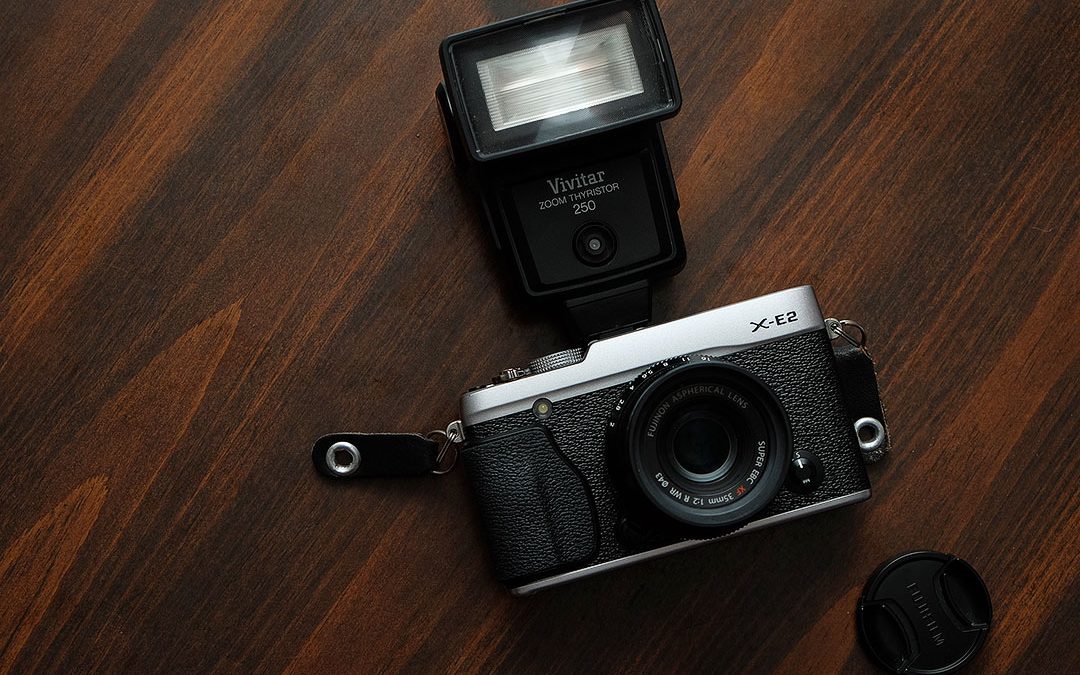 Since the beginning of my photography career (perhaps life in general), I have been a huge proponent of seeing how much can be accomplished with minimal cash outlay.  Sure, at times this has been because of major budget restrictions, but other times it was simply my way of staging a one-man rebellion against the swirling tide of consumerism…almost like gaming the system, as it were.  Like I recently told Udi Tirosh, founder of DIYPhotography, “You inspired me early in my career, and now I have become an insatiable monster of your own creation.”

But, I have learned throughout life that: a) sometimes you get just what you pay for, and b) sometimes it’s really not worth reinventing the proverbial wheel.  However, that’s more of a side note…

I go through phases in life.  Some might call them mood swings, but I prefer to think of them as balance.  Either way, I still sleep at night, so it matters very little what label you slap on them.  At times I can get all wrapped up in modern technology and gadgetry, and sometimes I become almost obsessed with the old.  I love antique malls, I find [quality] flea markets to be a wonderful shopping experience, and estate auctions have turned me into an adrenaline junkie (or that’s what I blame it on, at least).  But I’m not big on antique décor or the resale value of items.  I prefer what I call “functional antiques” – items of purpose that are affordable and work just as well, if not better, than some of their modern counterparts.  I shave with a razor from the 1930s because it gave me the best shave of my life, even compared to modern options.  I cook with old cast iron pans because they were cheap, easily refinished, and require little maintenance (not to mention their awesome abilities at actually cooking food).  And, the list could go on…but that’s a different rabbit hole.  (In case you haven’t noticed, focus is one of my challenges in life.) 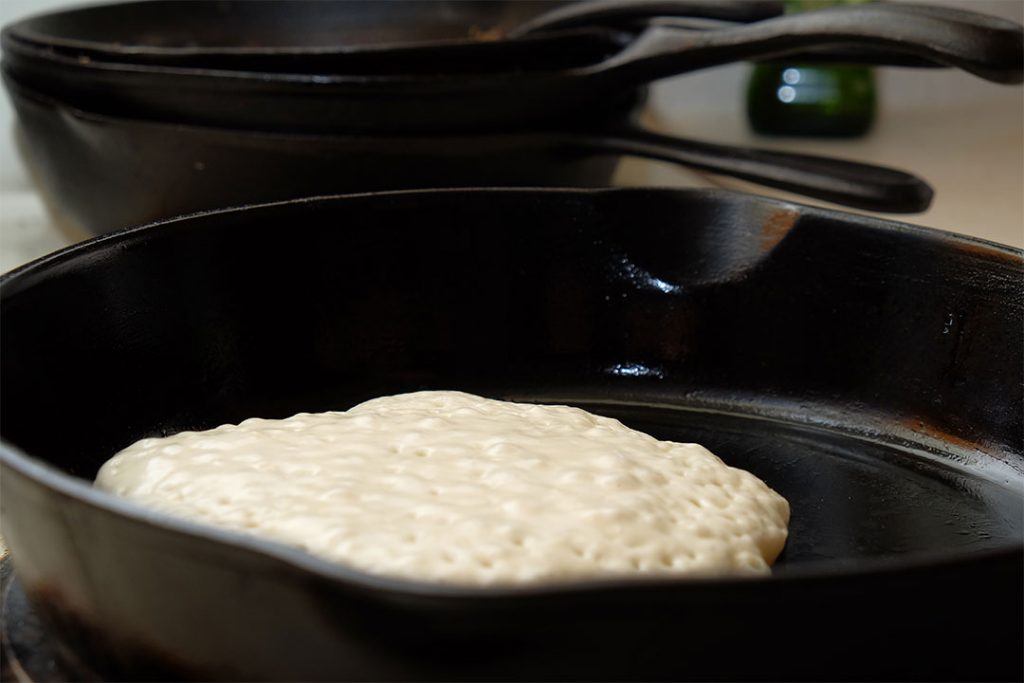 Sometimes this periodic obsession spills over into photography as well.  (What?  I can’t help it…)  But first, let me clarify a few things:

What I get all excited about is when I find functional gear, whether it be lenses, flash units, etc. that I can put to actual use in the field.  This was the case with a recent find…

After an appointment with the young protégées today, I figured we’d make a quick stop at a local antique store on our way home, just to see what there was to see.  As I was about to bolt from the vehicle, my daughter started laughing and pointed to the large sign right in front of us that read, “Open Daily…Close Tuesday.”  After muttering a few G-rated profanities, I decided to head to another place nearby.  I was not to be deterred.  But that shop and the one after it also sported signs saying “Closed Tuesday.”  (Seriously, what the monkey feet?!  If any of the proprietors happen to be reading this, please explain why you’re all closed on Tuesdays!)  Still determined to browse a bunch of often-overpriced crap, we headed to another location I knew was open on Tuesdays.  (Honestly…Tuesday?!  WHY??!)

Traveling through the shops at a fairly rapid pace and nearing the end of our so-far-fruitless quest, I abruptly stumbled upon a stack of old photography gear, a neat pile of lenses and flash boxes.  While an additional manual lens is always a great addition to any collection, I’m not really in the market for another lens and its necessary adapters right now.  But, what I was interested in were the old flash units in the boxes.

When I began my foray into photography, the first flash I used was a loaner Vivtar 283 from my father.  It was a very capable flash and worked well during its second generation of use, though it’s a miracle I didn’t fry any modern circuitry with it (I didn’t know any better at the time).  Over time, I accumulated additional lights, progressed to e-TTL speedlights and monoblocks, and virtually forgot about the value of these old strobes.  But, then my needs, circumstances, and expectations changed: 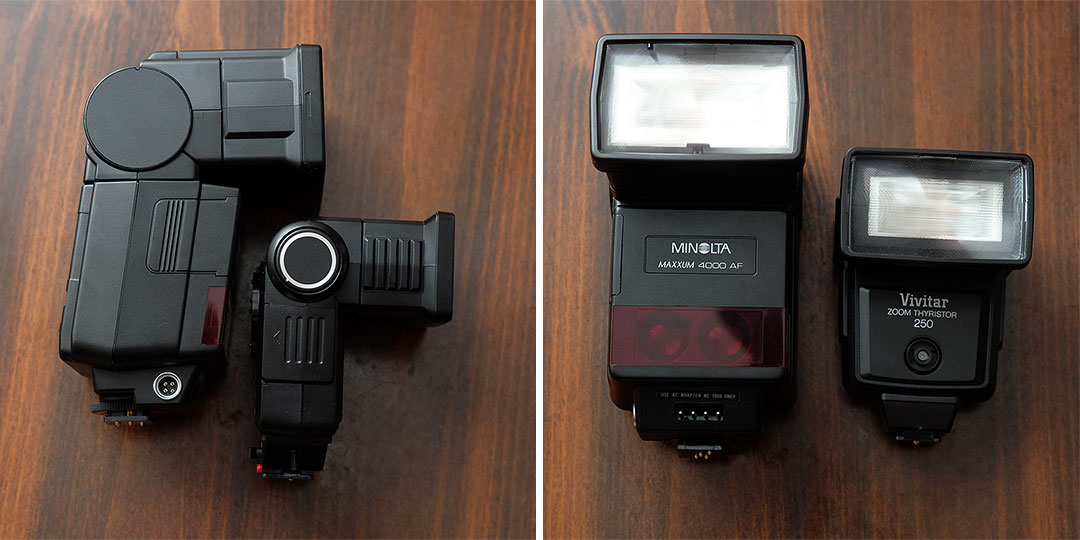 Okay, so maybe “bronze,” “brass,” or even “quality aluminum” would be a better metaphor, but I had still stumbled upon a good find.  There were several flash units in that stack of boxes, and they were mostly in mint condition.  After doing some quick Googling while standing in the aisle, I selected the two units above, both priced at a few dollars each, and made my purchase.

The Minolta Maxxum 4000 AF was simply purchased as an additional off-camera speedlight…they come in handy, especially in tight spaces.  It’s of the old analog TTL variety (typical of the 1980s and ’90s), and while they can be great for manual operation on a light stand, I have learned from experience that they can be a pain to operate on-camera (in manual mode, obviously).  However, the much smaller Vivitar 250 is what really excited me.  I recently shared a post about rediscovering an old Pentax flash in the bottom of a closet, and while that little unit works great, it a) is still kinda bulky on the top of a small camera and b) doesn’t have a bounce head.  This particular Vivitar is actually slimmer, nicer-looking, and runs on only two AA batteries instead of four, making it the perfect weight.  The zooming bounce head is just an added bonus.

Now, before the armchair pundits start jumping down my throat for using such a puny flash on a camera and still calling myself a professional:  I do not plan to use this for professional work.  Sure, if I need a small light to stand in for another one who might be out on a smoke break…whatever.  But my main purpose for purchasing it was as a small, compact, flash unit that I can use on a smaller, mirrorless camera for those times of personal, informal shooting.  (Why am I even clarifying?!  Social guilt, I suppose…)  Besides, the end product is all that matters.

After verifying the trigger voltage of both units with a multimeter to be sure I wouldn’t fry anything, I gave them a try, and I couldn’t be happier.  (Okay, so a beach hut in Fiji might rank a little higher, but we’re talking reality here.)  For far less than the cost of even a used Yongnuo speedlight, I had expended the arsenal, meet a need that I felt, and gave a new lease on life to a couple of pieces forgotten by time. 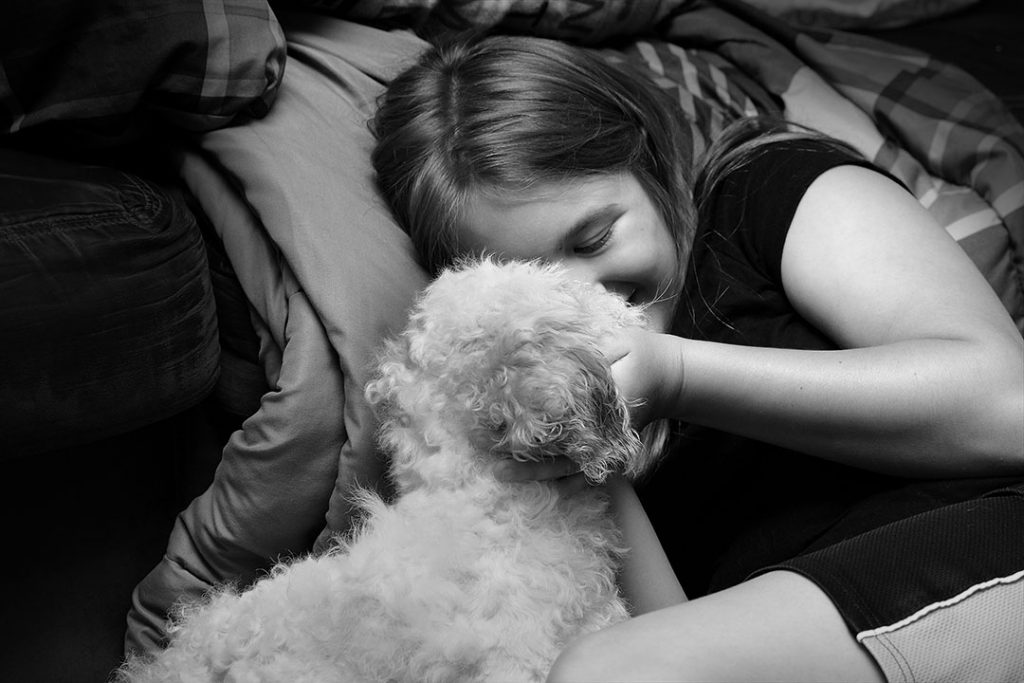 WORD OF CAUTION:  For those looking to use old flash units with a digital camera, be aware that sometimes that trigger voltage of the older units is too high for modern microchips and can fry them.  Here’s a good discussion on it.  Using them off-camera via wireless triggers is typically fine (because they aren’t in contact with the finer electronics of the camera body), but they have been known to kill the occasional camera.  A list of trigger voltages for various vintage models can be found here, but it is always best to verify for yourself before taking the risk.  Either way, I won’t be held responsible for what you may or may not do.

There’s all kinds of higher moral lessons that can be gathered from this, but I’m not in a philosophical mood at the moment.  So, I’ll keep it simple:

Will I still be purchasing those Fuji speedlights in the future?  Most likely.  But, for the time being, just let me feel like I’ve stuck it to The Man.  Now, go forth and see what you can salvage from the clutches of a bygone era.