RESULTS: How often do you have family portraits taken? 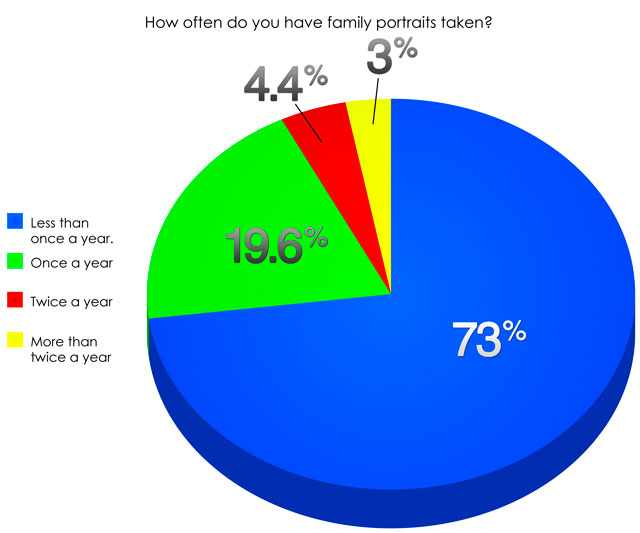 Last week I had posted a poll asking readers and social media followers how often they have family portraits taken. After I dumped all of the votes into my public opinion projector, I ended up with some results, the winner of which surprised me a bit.

I was certain that the majority winner would be those who have family portraits taken once a year as this seems to be somewhat of a stereotype for the “traditional,” American family. Thoughts of family photo day conjures up visions of screaming children, mothers with shattered nerves, and the ever-popular wacky outfits such as is typified in an episode of Raising Hope.

But, apparently, the majority does not fall into the annual trap of cheesy smiles and forced happiness. In fact, less than one-fifth of you claimed such photographic regularity. Granted, “less than once a year” is pretty vague and can mean anything from every fourteen months to every fourteen years to never. But, it does provide a little insight into the photographic spending habits of the “average family.”

My family, for one, has never had official family portraits taken (and by “official” I am not referring to the stuffy Olan Mills variety…just official-y…pictures…with a photographer and not a camera timer), a point which I am growing to regret more as time goes on and the children get older. Sure, we’ve had family snapshots, and I take portraits of my wife and kids, although not as frequently as I should, but it’s still not the same as having all of us laughing and having a good time in the picture together.

Which camp do you fall into? What are the reasons for your family photo frequency (or infrequency)?