“Faces of Addiction” – an amazing project by Chris Arnade 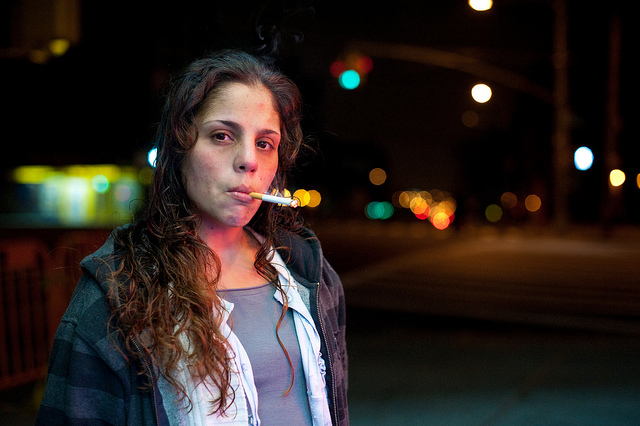 “It’s easy to ignore others,” Chris Arnade, a New York City photographer currently working on a project entitled “Faces of Addiction,” says of life in the metropolis. “By not looking, by not talking to them, we often fall into constructing our own narrative that affirms our limited world view. What I am hoping to do, by allowing my subjects to share their dreams and burdens with the viewer and by photographing them with respect, is to show that everyone, regardless of their station in life, is as valid as anyone else.”

As Chris puts it, “I post people’s stories as they tell them to me. I am not a journalist, I don’t try to verify, just listen.”

I love what Chris is doing, his concept behind the project, and the message he is sharing with those who encounter his work. Vanessa, thirty-five, had three children with an abusive husband. She “lost her mind, started doing heroin,” after losing the children, who were taken away and given to her mother. The drugs led to homelessness and prostitution. She grew up on Arthur Avenue in the Bronx, but now spends her time in Hunts Point, “trying to survive everyday. Just doing whatever it takes.”

She was standing on the cold street corner looking for business, wearing only flip flops and smoking with her two friends. When I asked her how she wanted to be described, Mary Alice jumped in and said “She’s the sweetest woman I know. She will give you the shirt off her back, if she has one on.”

Maribel approached me and my friend Nina, looking for fifty cents. I asked her if I could take her picture and listen to her story. She replied, “If I tell you my story, I´ll make you cry, but I wanna do the before and after, and I promise a year from today you are gonna take my picture again and I´m gonna be bloomin.”

An addict (mostly crack), Maribel is the mother of five children. Her five-month old and her husband were killed in a car accident when she was just 19 years old. A year ago she lost her baby boy, James Alexander, to the courts and since then has been in a downward spiral, her health is failing and she is back into drugs. With tears in her eyes she said “You know how heartbreaking that is? I had five children and never had one been removed.”

When I asked her about prostitution she said, she used to, but “now I get in the guys cars but I don’t do nothing. I rob them, honest to God.” When I told her I was going to write that she said, “I know who I am, I know where I stand, and I know where I´m heading. I can always hold my head up high.”

Check out the entire “Faces of Addiction” collection: