This is apparently what some police officers see when they look at a camera. Image courtesy of PetaPixel.com

It’s been a long time coming, but finally there is a law enforcement agency ready to uphold the Constitutional rights of photographers and videographers, at least within their jurisdiction.

Ever since September 11th, our country has seen it’s citizens’ civil liberties slowly stripped away, and those within the photographic and journalistic communities have taken a harder hit possibly than most. Countless instances of law enforcement on all levels harassing and unlawfully detaining photographers, demanding that equipment be turned over and images erased, ordering photographic activities be ceased on public ground, threatening arrest, and the list goes on. One little problem — ALL OF THAT IS ILLEGAL!

But, who do you complain to when it’s the bloody law enforcement carrying out the illegal activities?

Well, if you’re in DC and not too busy being raped or mugged on Capitol Hill, you can call (hypothetically) Cathy Lanier, Chief of Police for DC’s Metropolitan Police Department who recently handed down a directive to members of the police force specifically outlining their restraints when it comes to the rights of citizens to photograph and video within their jurisdiction. 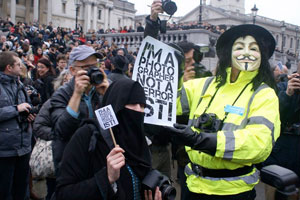 Image courtesy of The Online Photographer

“The Metropolitan Police Department (MPD) recognizes that members of the general public have a First Amendment right to video record, photograph, and/or audio record MPD members while MPD members are conducting official business or while acting in an official capacity in any public space, unless such recordings interfere with police activity.”

“A bystander has the same right to take photographs or make recordings as a member of the media.”

“If a person is taking photographs or recording from a place where he or she has a right to be, members are reminded that this activity by itself does not constitute suspicious conduct.”

“A bystander has the same right to take photographs or make recordings as a member of the media, as long as the bystander has a legal right to be present where he or she is located.”

Sweet! That’s awesome, but it only gets better! Read on…

“As long as the photographing or recording takes place in a setting at which the individual has a legal right to be present and does not interfere with a member’s safety, members shall not inform or instruct people that photographing or recording of police officers, police activity or individuals who are the subject of police action (such as a Terry stop or an arrest) is not allowed; requires a permit; or requires the member’s consent. Additionally, members SHALL NOT:
1. Order that person to cease such activity;
2. Demand that person’s identification;
3. Demand that the person state a reason why he or she is taking
photographs or recording;
4. Detain that person;
5. Intentionally block or obstruct cameras or recording devices; or
6. In any way threaten, intimidate or otherwise discourage an individual
from recording members’ enforcement activities.”

Finally, someone in law enforcement willing to stand up for a crusty old piece of paper sitting the National Archives. And, there’s more: Lanier states that officers “shall not, under any circumstances, erase or delete, or instruct or require any other person to erase or delete, any recorded images or sounds from any camera or other recording device. [Officers] shall maintain cameras and other recording devices that are in Department custody so that they can be returned to the owner intact with all images or recordings undisturbed.”